Do Bearded Dragons Make Noises? 5 Sounds You Might Hear 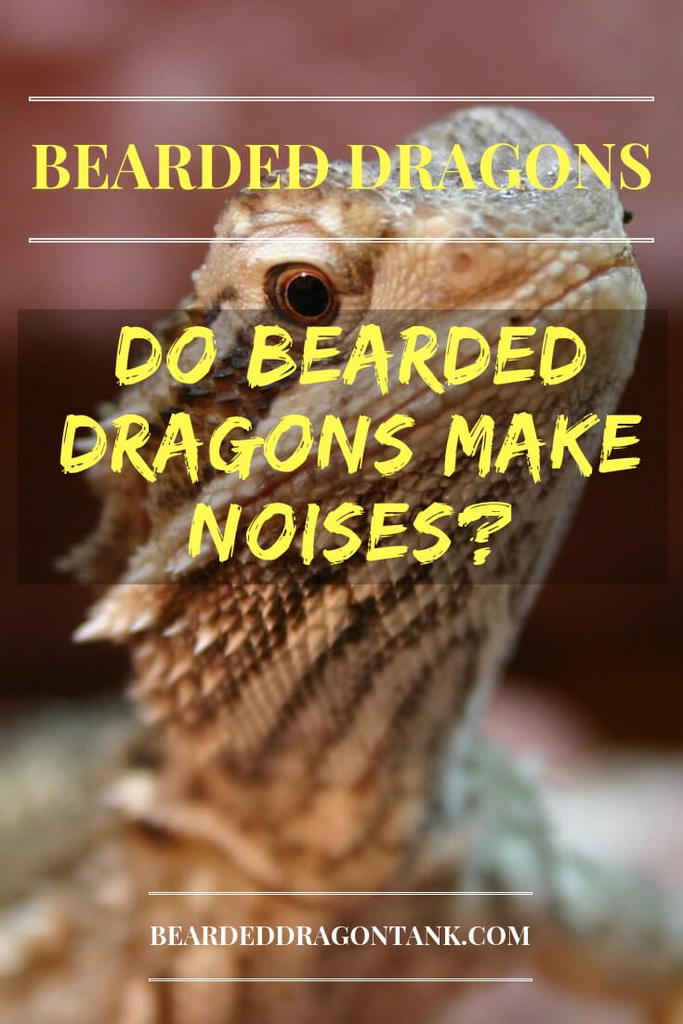 We all know that cats, dogs and especially birds can be pretty noisy sometimes. This could not only get on your nerves, but also on your neighbor´s nerves. So what about bearded dragons? Do bearded dragons make noises?

Bearded dragons do not have vocal cords, their communication is done by body language. They can hiss if they feel threatened, but they can´t make any real sounds like a dog, for example. However, the crickets that bearded dragons eat can be pretty noisy at times.

As I said above, bearded dragons do not make any noises. At least not like we do or other animals like dogs or cats do.

For example, bearded dragons use head bobbing to show dominance or to show that they are ready to mate. They wave with their arms to show submission. I am sure you already have seen some videos on Youtube that shows a bearded dragon waving. It looks actually pretty funny.

Their body language is perfectly suited to their lifes in the wild. Bearded dragons are territorial and have very good eyes. If they see another bearded dragon entering their territory, they can tell the intruder by showing a certain body language that it has to go or that it is allowed to stay from the distance.

The coloring in bearded dragons also plays a big role in communication. If you thought till now that only chameleons can change their color, you were wrong. While bearded dragons cannot show completely different colors, they can show brighter or darker colors.

For example, they can color their beard black to show that they feel discomfort. A black beard is also used while mating. If you want to learn more about that, read this article about bearded dragons and black beards.

If bearded dragons hiss, they always combine this with a very strong body language.

Often times, bearded dragons show a very black beard while doing that and they also puff their bodies and their beards up to seem bigger and more dangerous. Of course, bearded dragons have to open their mouths to hiss.

That´s why a lot of bearded dragons are sold to families with kids, but also to beginners.

If you want to know exactly when and why bearded dragons hiss, read my article on that here.

Some bearded dragons scratch the glass of their tank and it seems that they want to get out. Not all bearded dragons do this and while it is not very noisy it can get on one´s nerve from time to time.

There are various reasons for glass surfing. It could be that your bearded dragon has seen a fly or a spider at the other side of the room. Remember, they have very good eyes.

However, it could also be that your bearded dragon has learned that you will let it out if it shows this behavior. Bearded dragons are actually pretty smart and experiments were made that show how smart they really are. If you want to learn more about this, click here.

Digging in bearded dragons is a natural behavior. Bearded dragons like to dig caves and they also like to bury themselves in sand.

Unfortunately, the majority of bearded dragon owners does not allow this behavior, because they use reptile carpet or newspaper as substrate.

Why are they doing this? Some bearded dragons eat substrate from time to time. If you use a sand mix as substrate, it can happen that your bearded dragon gets impacted from eating too much substrate. That´s why many people avoid any substrates that could lead to impaction.

However, the truth is that bearded dragons only eat substrate if they feel that they need to balance their minerals. Offering calcium at all times will help to avoid this behavior in bearded dragons.

Digging is not loud at all and you should encourage your bearded dragon to do this.

I recommend to get a clay mix as substrate. If you want to know which substrate I like to use, read my bearded dragon substrate guide.

Is Your Bearded Dragon Sick?

It is not really a hissing like the normal hissing, it is more like a noisy breathing combined with coughing or even choking.

Their Food Can Be Pretty Noisy

If you buy a full box of crickets, you probably will hear some sounds chirps from time to time. Depending on how many crickets you have bought, you could even hear that pretty often.

If this noise could get on your nerves depends on what you like. I love those sounds actually and I know a lot of people who also love them.

Still, if you don´t want to hear those sounds, there is an easy fix. Simply buy dubia roaches instead of crickets. Dubia roaches are way healthier for your bearded dragon and they are absolutely silent.

So you just have learned that bearded dragons are pretty silent creatures, but there are still a couple of questions left that a lot of people ask all the time.

Are Bearded Dragons Noisy At Night?

Bearded dragons do not have vocal cords and are not able to make any noises. Besides that, bearded dragons are diurnal, which means that they sleep during the night and are active during the day.

Do Bearded Dragons Have Vocal Cords?

If you are looking for a very quiet and awesome pet, the bearded dragon is the pet you need. Always make sure that everything is okay with your bearded dragon if you hear any weird noises from it.

So, do bearded dragons make noises? Nope! They are silent

Any questions? Leave a message in the comment section below!