Leopard Gecko Lifespan – This Gecko Might Be Older Than You Are! 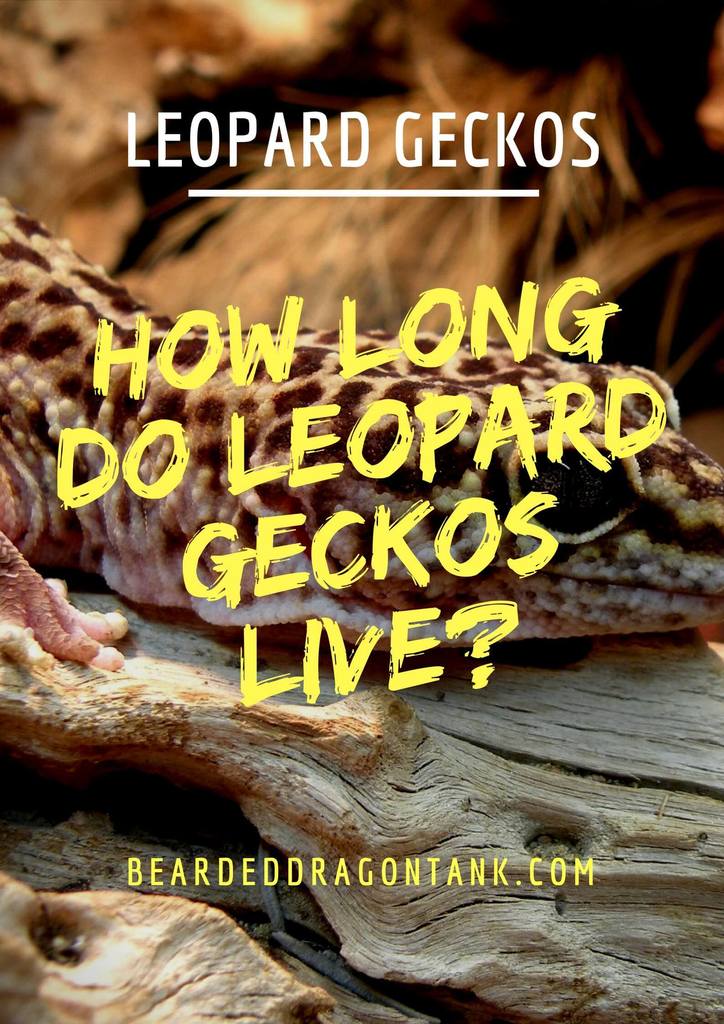 Imagine this, you buy a new pet and you love it like crazy, but it has a lifespan of only three years. That would be terrible, right? I mean if you are like most pet owners, you get pretty attached to the new family member and to lose it after such a short while is absolutely painful.

So no matter if you already have a leopard gecko or if you are thinking about getting one, you can calm down. The average leopard gecko lifespan is pretty long. However there are a couple of factors that can shorten the life expectancy of your beautiful gecko friend immensely. In this article you will learn how old leopard geckos can get and what you can do to increase their lifespan. Further I will tell you something about the oldest leopard gecko I know.

Quick Navigation
How Long Do Leopard Geckos Live?
How To Increase Your Leopard Gecko´s Lifespan
Brumation
Substrate - Be Brave
Let Them Hunt
Respect That They Are Nocturnal
Use A Hot Stone
The Temperature

How Long Do Leopard Geckos Live?

What do you think? 5 years? 10 years? Maybe even 15 years? What you might have heard is that leopard geckos only get 7 to 10 years old. However they can get much older than that. In fact they can get from 30 to 40 years old. Isn´t that crazy?

So why do people often say that they only get 7 to 10 years old? Well, because it is true, but it does not mean that this is their true life expectancy. The reason for such a short life is wrong husbandry. The truth is that 90% of all leopard gecko owners keep their pet in a completely wrong way. All that happens because of misinformation.

Leopard geckos are praised as great beginner pets, because they don´t need a big setup and they are undemanding in husbandry. However this is totally wrong! They can survive a long time even if you keep them poorly, but as you know now, this will cost them half of their actual lifespan or more. 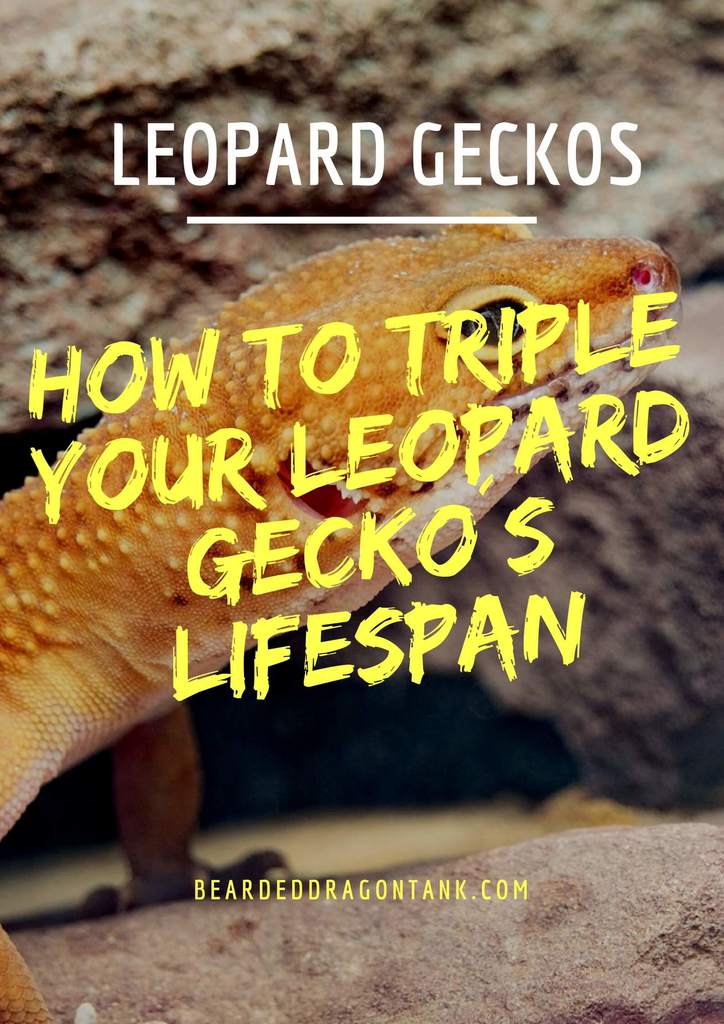 How To Increase Your Leopard Gecko´s Lifespan

I had a chat with a german leopard gecko keeper named Esther Laue. Believe it or not, her leopard geckos are 38 years old and they are still alive and in good health. Isn´t that absolutely amazing? Of course I had to ask Esther if she was willing to provide a couple of tips on how she was able to get their geckos that old.

She told me the exact things I praise as well. Keep your leopard geckos as natural as possible. Here are 6 things you can learn from Esther for a long leopard gecko life. (All pictures show Esther´s leo habitats and her geckos, how awesome is that?) 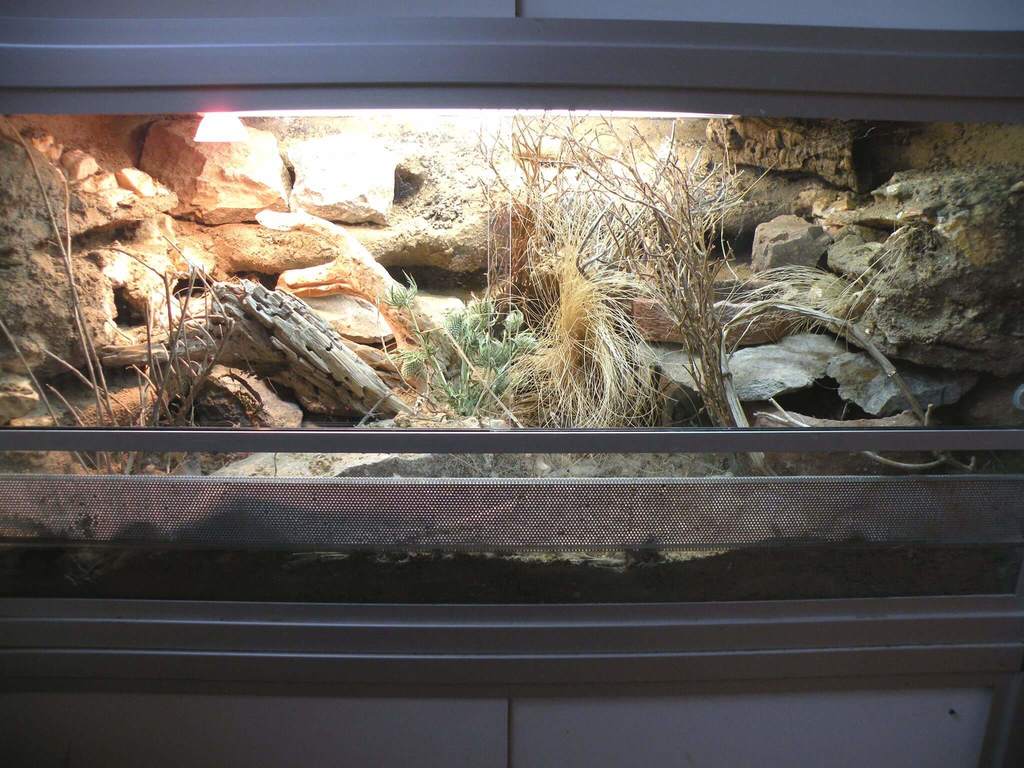 Especially beginners get a little bit nervous when their pet shows the first signs of an upcoming brumation. Geckos get a little bit lethargic and you could think something is from with them. However this is a very natural process and you should always support your leopard gecko during this phase. Let your gecko brumate. It is very good for their health since it is a form of resting and growing. 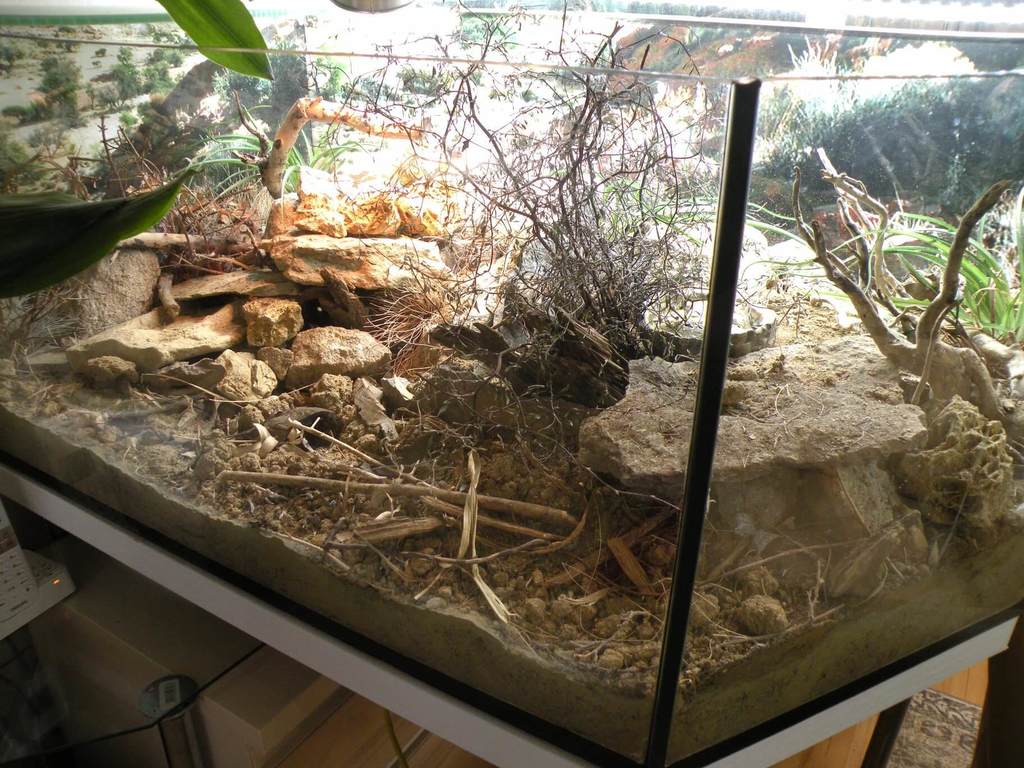 I know you might be afraid that your leopard gecko could get impacted from eating sand or soil. That´s why you might use repti carpet or newspaper as substrate. That does not contribute to a natural leopard gecko habitat though. Esther gets her substrate from outside. She doesn´t even go to a pet shop, she digs a deep hole outside and uses the soil (which is actually a mix of soil and sand) to create the habitat.

She also believes that eating substrate is part of their behaviour and not dangerous at all. Well, how could I disagree with her? She has leopard geckos that are 38 years old. And just to let you know, Esther never had problems with impaction. However I can understand if you are still afraid of doing this.

So here is a tip that will help you with using such a substrate: make sure that your leopard gecko always has access to a calcium source. Most of the time they eat sand when they feel that they need to balance their minerals. I recommend to get this substrate(click). If you want to know more about a safe substrate, read my substrate guide. 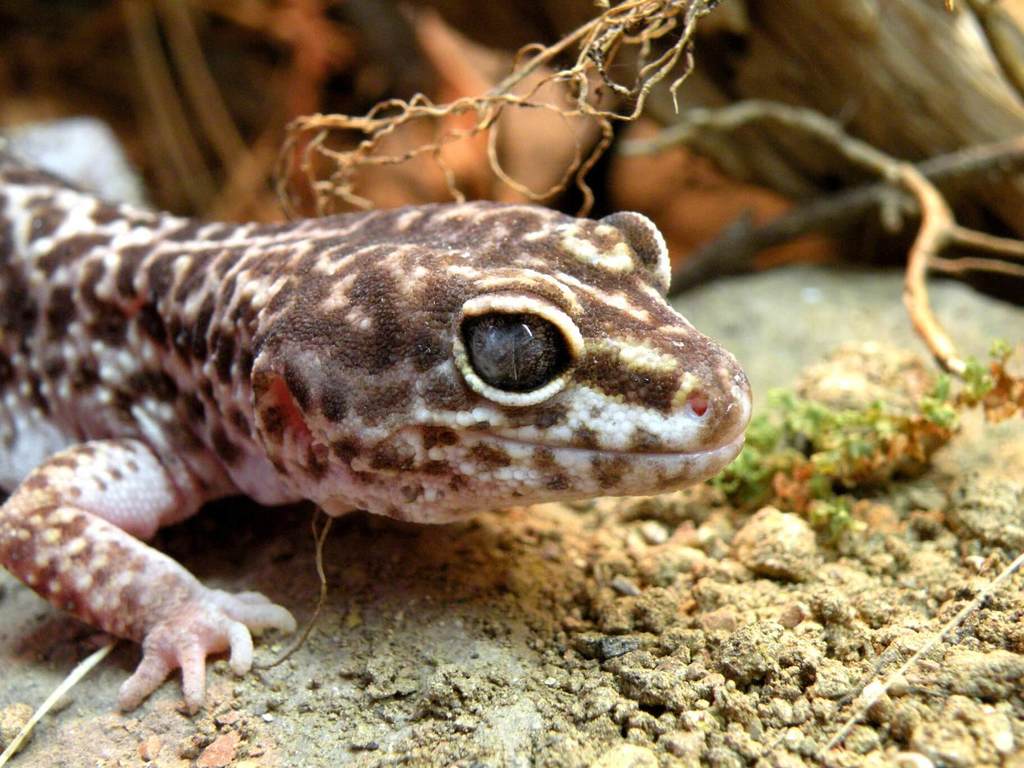 This is actually another point I always mention. Hunting is a form of exercise and your reptile needs exercise. They are locked up in a small tank and most of them do not have much to do. So it is very important to give them stuff to do, as often as possible. 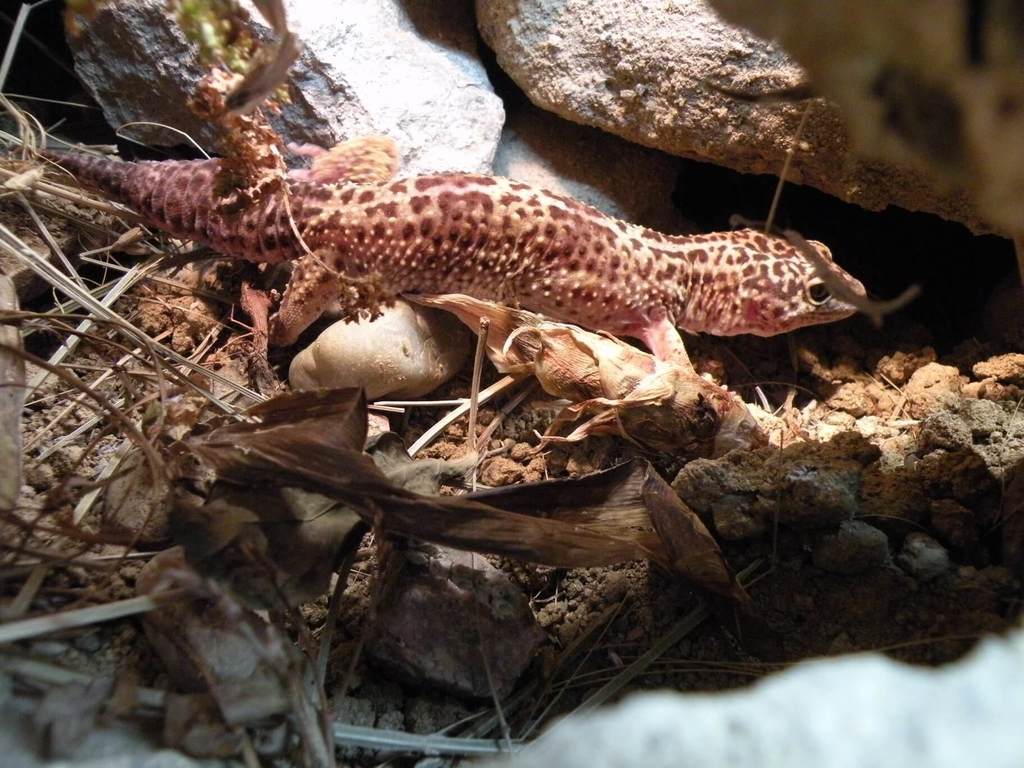 Respect That They Are Nocturnal

Further you should not feed your leopard gecko during the day. Always respect that they are nocturnal. In the wild, leopard geckos leave their hide at night to find food. You should simulate that in your tank as well. 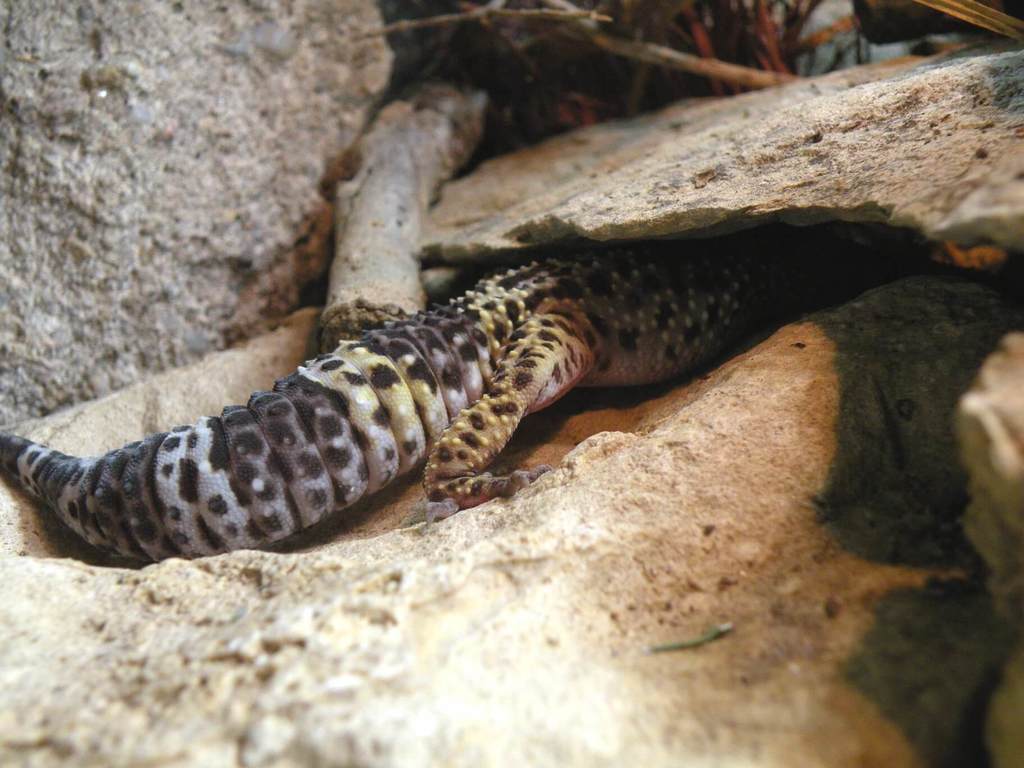 Use A Hot Stone

A problem that Esther sees in most leopard gecko tanks is that the geckos do not have an additional heat source to get on temperature when the hot spot turns off. That´s why she build a cave and uses a hot stone as roof. This way her leopard geckos can get heat from inside the cave and on the top of it. If you need a hot stone, have a look at this one, it is absolutely fantastic. 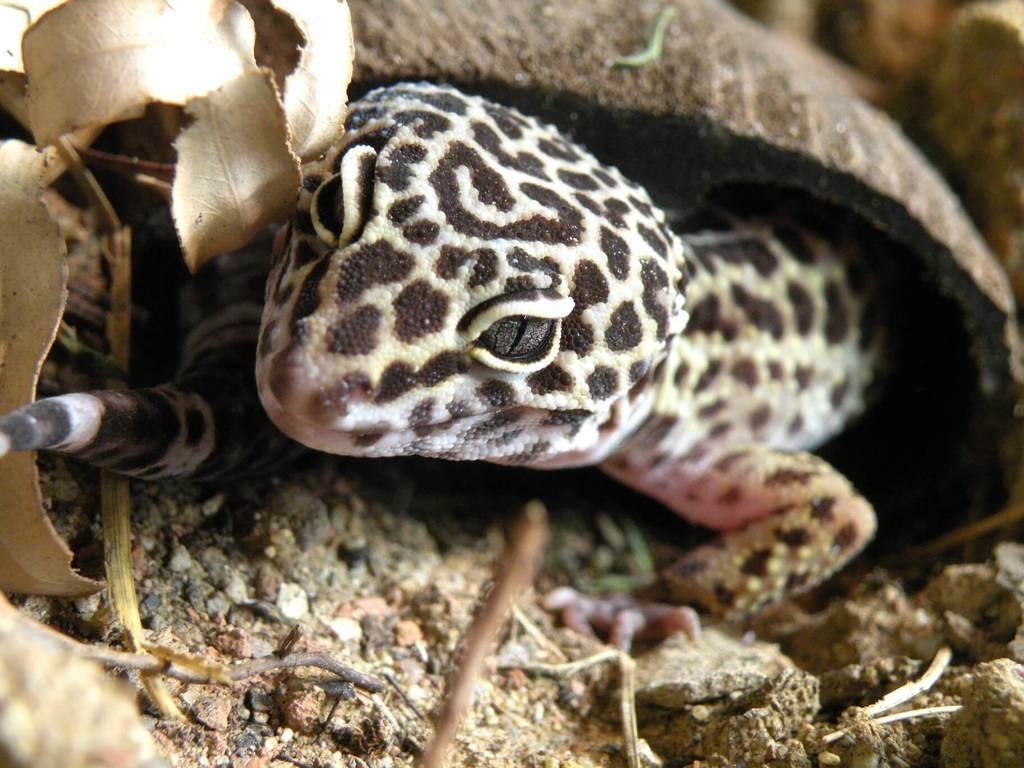 Esther does not believe in steady temperatures. That´s why she has variations in temperature in her tank from time to time. Further she makes sure that the temperature in the room where the reptile tank is located drop at night. She says that it is important to create a cold environment during the night. This way her leopard geckos can sleep deeply after hunting. 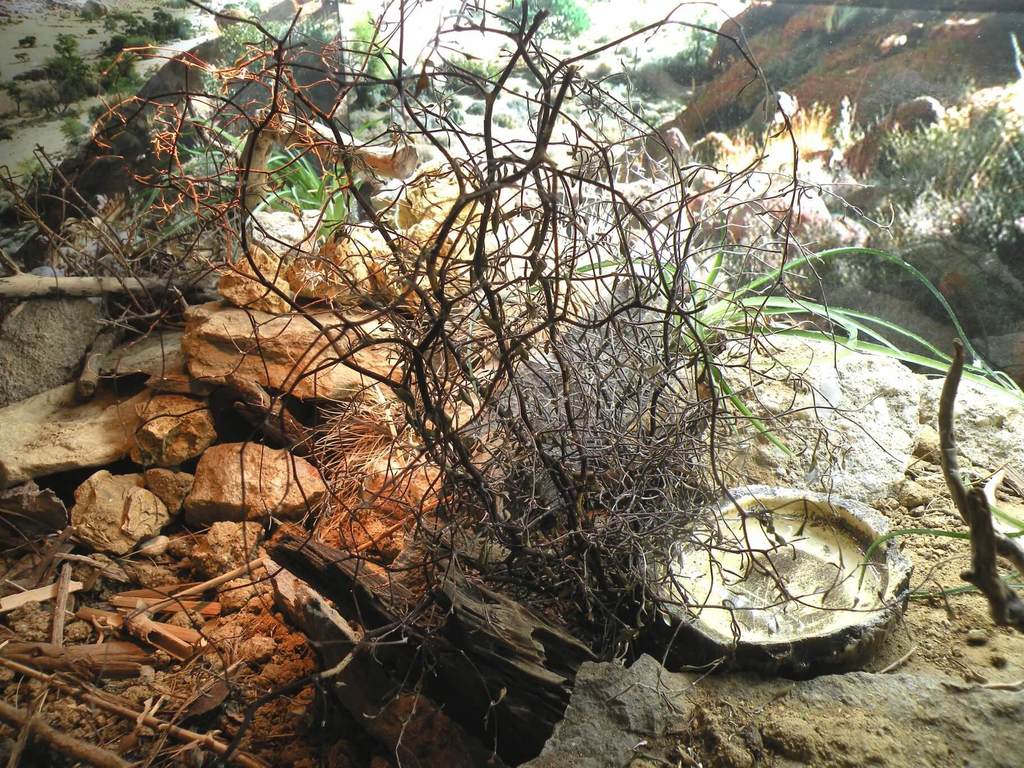 So that´s it. I know that you might not be able to implement all the points above. However just implementing a few might help your leopard gecko to get older than most other geckos and that´s what we all want, right? To have a very long and happy time with our leopard geckos.

Have fun with keeping your leo!