Can Bearded Dragons Live With Other Reptiles? 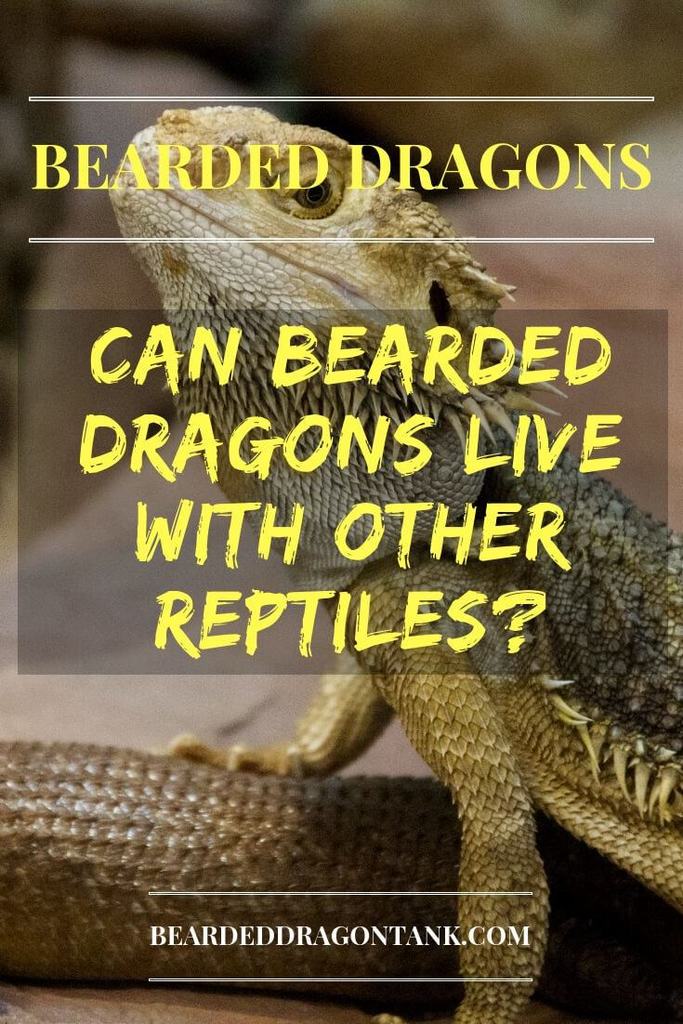 If you have a bearded dragon and a big terrarium, you might ask yourself if you could put another species in that tank together with your bearded dragon. However, can bearded dragons live with other reptiles?

Bearded dragons are solitary animals and shouldn´t even be kept with other bearded dragons. However, keeping them together with another species can sometimes work with a habitat that offers a lot of space and with a reptile species that has similar housing conditions as bearded dragons.

So does that mean that you should try it? How should you prepare for this and what do you need to know if you want to house two different species together? What species can beardies live with? Continue to read to learn more!

Can Bearded Dragons Live With Other Reptiles?

Well, the majority of pet shops like to make some good money and selling two or more bearded dragons brings in more money than just selling one beardie. Besides that, they can then sell you a bigger tank, a more expensive lighting bulb, a bigger background, more substrate and so on and so forth and this makes them so much more money.

However, sometimes keeping bearded dragons together with bearded dragons or other reptile species can work, but there are a couple of things you have to keep in mind before doing this.

Before you really want to try that you have to prepare properly and you have to do a lot of research, otherwise the animals could get seriously hurt or they could even die.

Put Them Together When They Are Young

If you really want to put a bearded dragon and another reptile species together in one tank or in one big habitat, trying this with juvenile or baby reptiles will make this way easier for you.

Both reptile species will have way more space in the habitat as they are still pretty small and besides that, the risk of one reptile getting seriously injured is way lower. Baby reptiles do not have as much power as adult reptiles.

While adult reptiles could definitely kill and eat each other, baby reptiles can´t really do any damage.

So to minimize the risk of injuries, try it with baby reptiles.

You Have To Get A Huge Habitat

Now that you want to put different species together you need to make sure that both have enough space to avoid each other if they want to. So it is not enough to just double the size here.

You actually have to build a habitat yourself or pay a lot of money to somebody who is able to do this.

You should not underestimate this, because every reptile can have a bad day and there are times when some reptile species want to be left alone.

For example, a lot of reptiles can get a little bit defensive while shedding, since shedding requires a lot of energy. Also, adult bearded dragons should brumate once a year and you should definitely be able to offer enough space so that your bearded dragon can brumate even if the other species doesn´t do that. 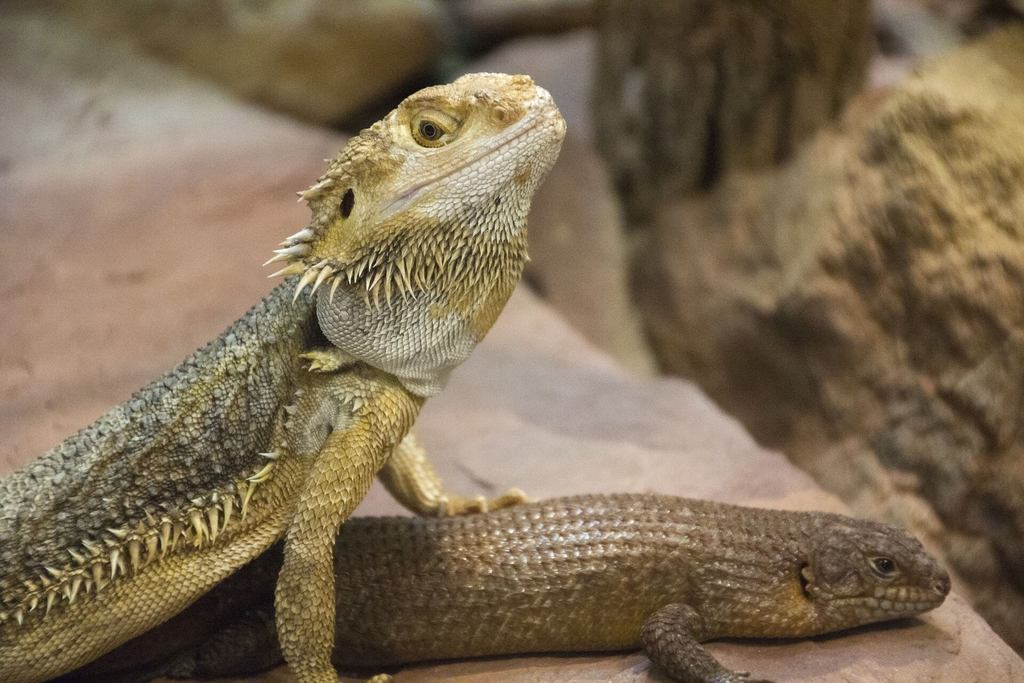 You Should Have A Second Tank

Or, if your experiment just doesn´t work out and both reptiles are very aggressive and attack each other, you definitely have to separate them.

You should always have a couple of options here. You should be able to separate the reptiles with a separating wall or you should have another habitat where you can put in one of the reptiles immediately.

A Lot Of Hides

Keeping both reptile species just with reptile carpet and a coconut half won´t work. Actually, this never works no matter how many reptiles you have. You should always create a very natural habitat with a lot of hides for your reptiles.

If you keep two different species you might even need more hides. Having enough hides can make the difference between attacking and fleeing.

Let´s say the other reptile is scared of your bearded dragon and wants to avoid it, without a hide, there is no other possibility than attacking. Keep this in mind.

I think I don´t even have to tell you this, but your bearded dragon and the other reptile species should have the same housing conditions. It is recommended that both species almost need the same temperatures and have the same UVB requirements.

However, your habitat must meet the housing requirements of both reptiles otherwise one of the reptiles will get sick.

There is no way that you heat such a huge habitat with just one basking spot. However, I still want to mention that you should have multiple basking spots.

This makes it easier for both reptiles to avoid each other if they want to.

You should always make sure that food is available in a lot of spots in the huge habitat. Do not put all the food in one spot.

Put two to three food bowls with greens in your habitat and let the live food run around in the habitat freely. This way both reptiles have to hunt their food and can do this wherever they want.

Still, always keep a close eye on both reptiles´ weight. If one reptile loses too much weight you might have to handfeed it to make sure that it gets enough food.

Further, you should keep in mind that bearded dragons are always pretty hungry and if they don´t get enough food, they might try to eat the other reptile.

They Should Have The Same Size 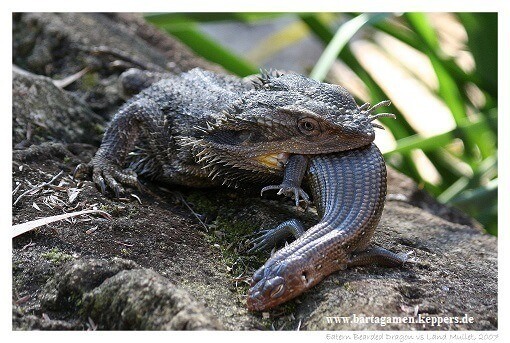 The Gender Can Make The Difference

Male bearded dragons are very territorial. In the wild they have pretty big territories and they defend them with everything they got. If puffing up, hissing and showing a black beard is not enough, a bearded dragon will definitely attack until the intruder runs away.

Female bearded dragons are not territorial. In the wild they are looking for partners and male bearded dragons do not attack a female in their territory. Instead they try to mate with the female, but the female can choose to mate or not and it can leave without being attacked (male beardies seem to be gentlemen, lol).

So, as you see it makes more sense to try this with female bearded dragons. You have to do your research on the other reptile species.

Parasites Can Be Deadly

That´s why it is important to do your research on the different parasites bearded dragons and the other reptiles carry and check if they could be harmful for each other.

What You Should Know

The chance that this works out is actually pretty small. It can work for a while and all of a sudden, your bearded dragon or the other reptile could be dead.

So please do not expect this to work out, instead be always prepared for a failure so that you can seperate the other reptile from your bearded dragon.

However, if you follow the advice I have given you above, the chances that this works out rise immensely.

What Can Bearded Dragons Live With?

So let´s talk about a couple of  species a bearded dragon might be able to live with together. However, I also name species that should not be kept together with bearded dragons, since a lot of people are asked for it.

I have written an entire article on this topic, read here why it is impossible to keep bearded dragons and leopard geckos together.

Can Bearded Dragons Live With Turtles?

Bearded dragons should not live together with turtles. Bearded dragons are desert dwellers while most turtle species need a lot of water, not too high temperatures and prefer cooler and moist places to sleep. Further, both species can pass parasites and diseases to each other.

The only way to make this work is to have a huge habitat where both species almost don´t see each other.

Can Bearded Dragons Live With Uromastyx?

Some people keep bearded dragons and uromastyx together with success. Although the housing conditions are slightly different and they need completely different diet, keeping these two species together can work if the habitat is really big. Uromastyx and bearded dragons can get aggressive and both should have enough space to avoid each other.

Still, I would not recommend to keep them together. Uromastyx have a very strong bite which could kill a bearded dragon easily. A bearded dragon would have no chance in a fight.

As you see, it is not easy to house another reptiles species together with a bearded dragon.

It can work sometimes, but you should always be prepared to separate boths reptiles.

So, can bearded dragons live with other reptiles? Most of the time it doesn´t work, but if you have a habitat that is big enough you can give it a try.

Any questions? Leave a message in the comment section below!